The deal about living in a parallel universe that exists in your head.

I remained emotionally entwined with Erica, and I brought something of her with me to Lahore – or perhaps it would be more accurate to say that I lost something of myself to her that I was unable to relocate in the city of my birth. Regardless, the effect of this was to pull and tug at my moods; waves of mourning washed over me, sadness and regret prompted at times by an external stimulus, and at others by an internal cycle that was almost tidal, for want of a better word. I responded to the gravity of an invisible moon at my core, and I undertook journeys I had not expected to take.

Often, for example, I would raise at dawn without having slept an instant. During the preceding hours, Erica and I would have loved an entire day together. We would have woken in my bedroom and breakfasted with my parents; we would have dressed for work and caressed in the shower; we would have sat on our scooter and driven to campus, and I would have felt her helmet bumping against mine; we would have parted in the faculty parking area, and I would have been both amused and annoyed by the stares she received from the students passing by, because I would not have known how much those stares owed to her beauty and how much up her foreignness; we would have gone out for an inexpensive but delicious dinner in the open air, bathed by the moonlight beside the Royal Mosque; we would have spoken about work, about whether we were ready for children; I would have corrected her Urdu and she my course plan; and we would have made love in our bed to the hum of the ceiling fan.

I have also been transported in ways that were no less vivid but far more fleeting. I recall once, during the monsoon, watching a puddle form in the rut of a muddy tire track beside the road. As raindrops fell and water filled the banks of this little lake, I noticed a stone standing upright in the center, like an island, and I thought of the joy Erica would have had at gazing upon that scene. Similarly, I recall another incident, after I had a collision on my scooter, when I returned home and stripped off my shirt to see a livid bruise on my rib cage, where hers had once been. I stared at myself in the mirror and touched my skin with my fingers and hoped that the mark would not soon fade, as it inevitably did.

Such journeys had convinced me that it is not always possible to restore one’s boundaries after they have been blurred and made permeable by a relationship: try as we might, we cannot reconstitute ourselves as the autonomous beings we previously imagined ourselves to be. Something of us is now outside, and something of the outside is within us. Perhaps you have had no comparable experience, for you are gazing at me at a raving madman. I do not mean to say that we are all one, and indeed – as will soon become evident to you – I am not opposed to the building of walls to shield oneself from harm; I merely wished to explain certain aspects of my behavior upon my return.

My idea of relationships has been formed on the basis of long discussions with friends, observing some and then certain realizations that come while you’re growing up.

There isn’t anything such as moving on, if you’ve been in love. In the sense that you just don’t get over someone you’ve been romantically in love with. You just let other people in and fill up that crazy little void in your life. If it IS indeed love, that is.

I don’t know how you would describe love. But how I see it is that it’s that phase where you’re crazy about someone. Where all you want is the beloved’s happiness. Where you’re ready to fight the whole world for the silly grin on their face. Where you lose your essence in them, and become who they are. Where physical boundaries or distances are just a state of mind. Where his breath becomes music to your ears, his words poetry. Where you love everything that the beloved loves, no questions asked. That space, I call love.

However, the sad part of love is that it does require reciprocation. No matter how selfless a lover you are, you do long for arms to hold you on some nights and tell you that you don’t necessarily have to do it all by yourself.

Another part I’ve understood is that the part of you with which you love someone becomes unavailable for the rest of the world, for the rest of your life.
Think of it like building a castle in the air. Now if you put your bricks in it by investing all your emotions, and the beloved doesn’t put his bricks; it’s your castle. It’s not “our” castle. Which means that those bricks in that castle of yours are used up. You can’t use them with another person.
But here’s the deal: You can never run out of bricks. Sure you might have lesser bricks compared to the previous castles, but you’ll always have some more.

What would you do?
Build castles in the air with the beloved without a base, or a mundane house with someone else on the ground?

Women are ever ready to bestow their heart where sorrow cannot but be their lot. They will either string their garland of acceptance for some brute of a man who will trample it under foot and defile it in the mire of his passions; or dedicate it to some idealist, on whose neck it will get no holds, attenuated as he is, like the dream-stuff of his imaginings.

When left to do their own choosing, women invariably reject ordinary men like me, made up of gross and fine, who know woman to be just woman, that is to say, neither a doll of clay made to serve for our pastime, nor a transcendental melody to be evoked at our master touch. They reject us, because we have neither the forceful delusions of the flesh, nor the roseate illusions of fancy: we can neither break them on the wheel of our desire, nor melt them in the glow of our fervour to be cast in the mould of our ideal.

Because we know them only for what they are, they may be friendly, but cannot love us. We are their true refuge, for they can rely on our devotion; but our self dedication comes so easy that they forget it has a price. So the only reward we get is to be used for their purposes; perchance to win their respect.

‘I came back from the funeral and crawled around the apartment, crying hard, searching for my wife’s hair.
For two months got them from the drain, from the vacuum cleaner, under the refrigerator, and off the clothes in the closet.
But after other Japanese women came, there was no way to be sure which were hers, and i stopped.
A year later, repotting Michiko’s avocado, i find a long black hair tangled in the dirt.’

~Jack Gilbert.
Marriage is what happens ‘between the memorable’. We often look back on our marriages years later, perhaps after one spouse has died, and all we can recall are “the vacations, and emergencies”- the high
points and low points. The rest of it blends into a blurry sort of daily sameness. But it is that very blurred sameness, that comprises marriage. Marriage ‘is’ those two thousand indistinguishable conversations, chatted over two thousand indistinguishable breakfasts, where intimacy turns like a slow wheel. How do you measure the worth of becoming that familiar to somebody- so utterly well known and so thoroughly ever-present that you become an almost invisible necessity, like air?

I am the algebra, the meaningless numbers you cannot define.
I am the pain at the loss of something you wanted badly.
I am the brain chemicals which make you panic and act stupid.
I am the serial killer, the stranger in the dark.

I am the calculation, the girl who knows how to set things right.
I am the joy of reaching a far-fetched destination.
I am the much-needed sanity on those long-nights.
I am the daughter, sister, friend and lover. I provide meaning.

I am naive and inquisitive.
I am limitless and i have my boundaries.
I know it all, and i am still learning. 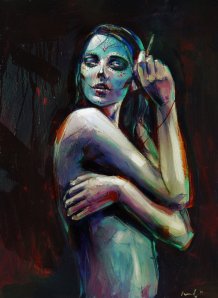 You are currently browsing entries tagged with relationships at Rants..